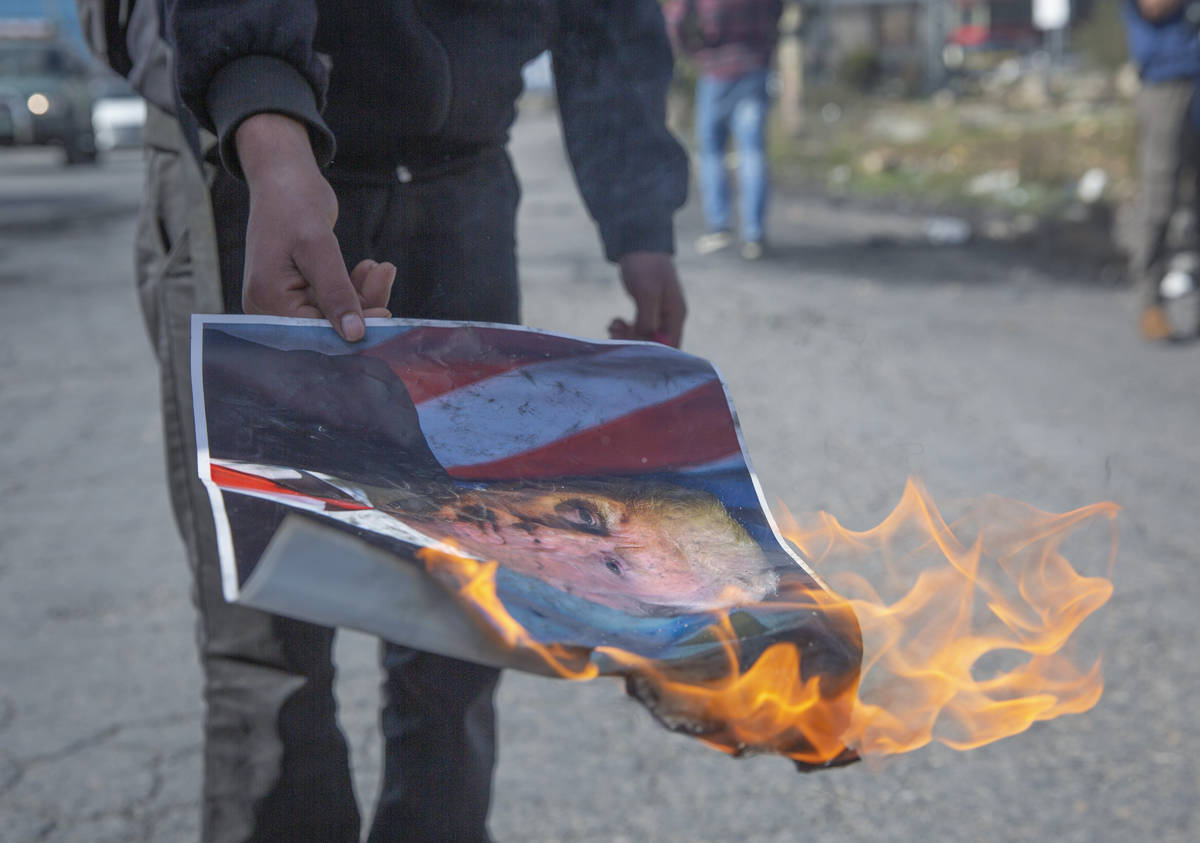 President Trump called his plan for Middle East “peace” an “unprecedented” development that swept past “even the most well-intentioned plans” of his predecessors. It is in keeping with the guiding animus of his presidency — a ceaseless desire to cast himself as the great breaker of the status quo and redeemer of crises that flummoxed those who came before him.

Of course, Trump’s supposed “deal of the century” may never come to fruition. It has been flatly rejected by the Palestinians, who swore off the process once it became clear the Trump administration was taking all its cues from the Israeli right and the settler movement. Few in the international community see the terms presented by Trump as the basis for a meaningful negotiation. By April, Israeli Prime Minister Benjamin Netanyahu, the Trump plan’s principal booster, could be out of office and embroiled in a criminal trial over his alleged corruption. By November, Trump himself could be a lame duck, with a progressive successor waiting in the wings to reverse course on U.S. policy in the Middle East.
But the Trump administration has spent the past three years tipping the already unbalanced scales in Israel’s favor. And that will have lasting consequences. 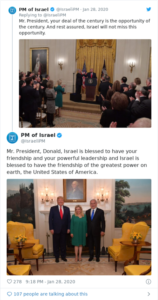 With the imprimatur of the White House’s plan, the Israeli government could vote as early as next week to annex portions of the West Bank. That could deliver a final blow to the battered husk of the two-state solution, the increasingly faint prospect of two separate Israeli and Palestinian states existing side by side. Successive U.S. administrations have pursued that goal to little effect; though Trump paid lip service to it this week, the details of his plan make clear the White House has given up on it.
Trump’s proposal was “a radical departure from traditional American diplomacy,” said Rob Satloff, executive director of the Washington Institute for Near East Policy, in a briefing with reporters this week. That’s because, among other things, it puts forward an American determination of a range of “final status” issues that were supposed to be subject to negotiation between Israelis and Palestinians: dispensing with the “right of return” for Palestinian refugees, designating a future Palestinian capital only on the fringes of Jerusalem and outlining the parameters of a future Palestinian state that looks nothing like a real state at all.
Critics of the document were appalled at its seeming disregard for Palestinian aspirations. It posits a four-year road map during which the Palestinians can meet a set of conditions to achieve an autonomous state, which, even then, will still be subject to the whims and diktats of the Israeli military. It renders Israel the ultimate judge of whether Palestinians deserve their full political rights and lays out the blueprint for a form of perennial occupation.

“The plan announced is a 180-page hate letter from the Americans (and by extension the Israelis) to the Palestinians,” wrote Daniel Levy, a former Israeli negotiator and diplomat. “Until one reads the entire document (and unless one knows the history of the conflict), it is hard to convey the depth of contempt and scorn this text displays toward Palestinians. It oozes colonialist supremacism.”

Veterans of the Israeli-Palestinian portfolio in Washington are worried about Trump’s heavy-handed gambit, since the abandonment of the two-state solution would necessarily shift the focus to the question of equal rights in one land. “Israel does not have an interest in having the Palestinians give up on their dream of statehood and aspiring instead to becoming voting citizens of Israel,” wrote former U.S. negotiators Dennis A. Ross and David Makovsky, who are also Satloff’s colleagues at WINEP, in The Post. “This would undermine the Zionist rationale for Israel as a Jewish and democratic state.”

Others contend the current state of affairs is the logical endpoint of decades of American acquiescence to Israel. “The Trump plan merely puts the finishing touches on a house that American lawmakers, Republican and Democrat alike, spent dozens of years helping to build,” noted Nathan Thrall, author of “The Only Language They Understand: Forcing Compromise in Israel and Palestine.”
“During the last several decades, as Israel slowly took over the West Bank, putting more than 600,000 settlers in occupied territory,” Thrall wrote, “the United States provided Israel with diplomatic backing, vetoes in the United Nations Security Council, pressure on international courts and investigative bodies not to pursue Israel, and billions of dollars in annual aid.”

To many onlookers, it seems Trump and his allies knew the Palestinians would not accept this proposal but pursued it nonetheless. “Whatever the White House might say, it never expected the Palestinian leadership would accept this plan or even consider some of its terms and conditions,” wrote Yara Hawari, a senior policy fellow at the Palestinian Policy Network. “And that means it can continue to buy into the decades-old and quite frankly racist narrative that the Palestinian people are rejectionist and unwilling to negotiate.”

Advocates of the Palestinian cause argue the new Trumpian moment presents an opportunity for a reset in the U.S. approach. A possible Democratic president in 2021 probably would be pressured by his or her base to reconsider American financial support to Israel. “We, as Americans, must recognize Palestinians’ full humanity,” wrote Yousef Munayyer, executive director of the U.S. Campaign for Palestinian Rights, “and wrestle with our complicity in denying it for so many decades.” ( Courtesy: The Washington Post)

Ishaan Tharoor writes about foreign affairs for The Washington Post. He previously was a senior editor and correspondent at Time magazine, based first in Hong Kong and later in New York