The Endless Fantasy of American Power : Neither Trump Nor Biden Aims to Demilitarize Foreign Policy 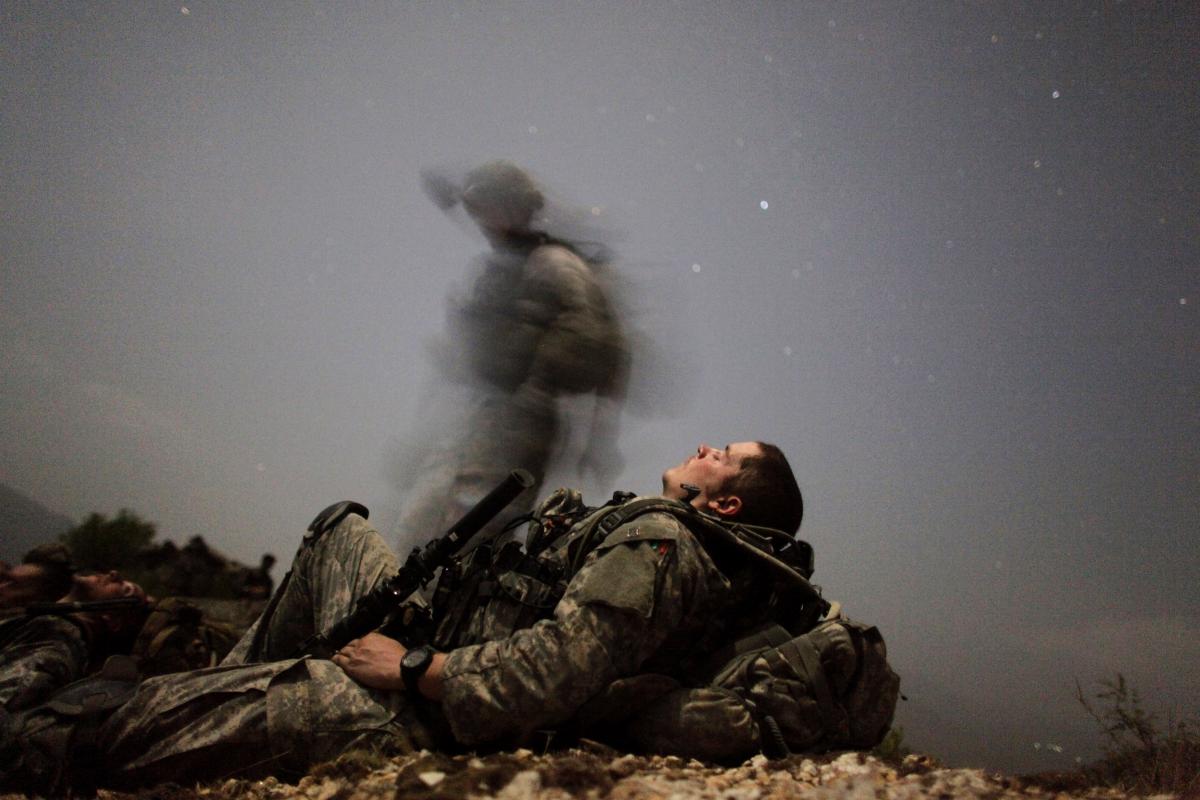 In this year’s presidential election campaign, candidates have largely sidestepped the role of armed force as an instrument of U.S. policy. The United States remains the world’s preeminent and most active military power, but Republicans and Democrats find other things to talk about.
Ever since the end of the Cold War, successive administrations have enthusiastically put U.S. military might to work. In the last three decades, the flag of the United States Army has accumulated 34 additional streamers—each for a discrete campaign conducted by U.S. troops. The air force and navy have also done their share, conducting more than 100,000 airstrikes in just the past two decades.
Unfortunately, this frenetic pace of military activity has seldom produced positive outcomes. As measured against their stated aims, the “long wars” in Afghanistan and Iraq have clearly failed, as have the lesser campaigns intended to impart some approximation of peace and stability to Libya, Somalia, and Syria. An equally unfavorable judgment applies to the nebulous enterprise once grandly referred to as the “global war on terrorism,” which continues with no end in sight.

And yet there seems to be little curiosity in U.S. politics today about why recent military exertions, undertaken at great cost in blood and treasure, have yielded so little in the way of durable success. It is widely conceded that “mistakes were made”—preeminent among them the Iraq war initiated in 2003. Yet within establishment circles, the larger implications of such catastrophic missteps remain unexplored. Indeed, the country’s interventionist foreign policy is largely taken for granted and the public pays scant attention. The police killing of Black people provokes outrage—and rightly so. Unsuccessful wars induce only shrugs.

THE CHIMERA OF “AMERICAN LEADERSHIP”
With something approaching unanimity, Americans “support the troops.” Yet they refrain from inquiring too deeply into what putting the troops in harm’s way has achieved in recent decades. Deference to the military has become a rote piety of American life. In accepting the Democratic Party’s nomination for the presidency, for example, Joe Biden closed his remarks with an appeal to the Divine on behalf of the nation’s soldiers: “And may God protect our troops.” Yet nowhere in his 24-minute address did Biden make any reference to what U.S. troops were currently doing or why in particular they needed God’s protection. Nor did he offer any thoughts on how a Biden administration might do things differently.
Americans don’t particularly want to hear about war or the possibility of war in the present season of overlapping and mutually reinforcing crises. And Biden obliged them in the most important speech of his career. The famously garrulous politician mentioned recent U.S. wars only in passing, briefly referring to his late son, who served in Iraq, and excoriating U.S. President Donald Trump for not responding more aggressively to revelations that Russia put bounties on U.S. soldiers in Afghanistan.
This aversion to taking stock of recent U.S. wars is by no means unique to Biden or confined to the Democratic Party. It is a bipartisan tendency. It also inhibits a long overdue reexamination of basic national security policy.
Protracted wars are not making Americans freer or more prosperous.
Between the fall of the Berlin Wall and the 2016 presidential election, leaders of both political parties collaborated in trying to demonstrate the efficacy and necessity of what they habitually referred to as “American global leadership.” Embedded in that seemingly benign phrase was a grand strategy of militarized primacy. Unfortunately, the results achieved by this assertion of global leadership proved to be anything but benign, as turmoil in Afghanistan and Iraq attest. Although the defense industry and its allies have profited from American wars, the American people have done less well. Protracted wars are not making Americans freer or more prosperous. They have instead saddled the nation with enormous debt and diverted attention and resources from neglected domestic priorities.
In 2020, further occasions for bristling, militarized U.S. leadership beckon. China offers the most obvious example for hawks, with demands that the United States confront the People’s Republic growing more insistent by the day. Many in Washington appear to welcome the prospect of a Sino-American cold war. Other prospective venues for demonstrating assertive U.S. leadership include in operations against Iran, Russia, and even poor benighted Venezuela, with prominent figures in the Beltway eager to have a go at regime change in Caracas.
To cling to this paradigm of U.S. global leadership is to perpetuate the assumptions and habits defining post–Cold War U.S. national security policy—and above all the emphasis on amassing and employing military might. The United States grants itself prerogatives allowed to no other country to remain, in its own estimation, history’s “indispensable nation.” To judge by the results achieved in Afghanistan, Iraq, and other recent theaters of war, this imperative will only continue to wreak havoc in the name of freedom, democracy, and humane values.
THE GLOBAL OVER THE GEOPOLITICAL
An alternative path exists. Proponents of this path, most of them anti-interventionist progressives, propose to reframe politics as global rather than merely international. That is an important distinction. A global political ethos highlights problems affecting all nations, whether strong or weak, rich or poor, as opposed to emphasizing geopolitical competition, which sees the United States preoccupied with fending off any and all challengers to its preeminence. Those shared problems are not difficult to identify. They include communicable diseases such as COVID-19, the danger of nuclear conflict, the deterioration of the global commons, and, perhaps above all, climate change.
A second Trump administration will never acknowledge the existence of this alternative path. And regrettably, a Biden administration will probably pay little more than lip service to it. Despite the Biden campaign’s nod toward climate change—a crisis but also, in Biden’s words, “an enormous opportunity”—his own record and his choice of advisers suggest an administration less interested in real change than in restoring the status quo ante Trump.
Trump won the presidency in 2016 in no small part because a considerable number of Americans had lost confidence in establishment policies that left the United States mired in what he and other critics of a militarized U.S. policy called “endless wars.” He offered himself as the fixer who would put “America first.” But he has fixed nothing—and broken a great deal more. With monumental ineptitude, Trump has inflicted massive damage on U.S. credibility while the wars he inherited continue.

Take at face value Biden’s acceptance speech for the Democratic nomination and it suggests that he is intent on pursuing what is in effect an “America first” agenda without resorting to that radioactive phrase. Biden presents himself as an agent of domestic renewal, promising to save “the soul of America.” He is not promising to redeem the world.
But saving the United States’ soul will require an honest reckoning with post–Cold War U.S. foreign policy and, above all, with the reckless misuse of military power that forms its abiding theme. Biden proposes as president to build a United States that is “generous and strong, selfless and humble.” Achieving this lofty goal will require more than simply repudiating Trump and all his works. It will demand an approach to statecraft that is itself generous and strong, selfless and humble, qualities that recent administrations have displayed only intermittently.
What should this kind of statecraft look like? It would emphasize multilateral collaboration rather than unilateral action. It would use force only as a last resort. It would honor treaty commitments. It would adhere to respected norms—for example, the prohibition on preventive war. It would encourage allies capable of defending themselves to do so. It would work to strengthen, rather than undermine, international institutions. It would cease to define the size of the Pentagon’s budget as the ultimate measure of national security.
Washington should cease to define the size of the Pentagon’s budget as the ultimate measure of national security.
Given his priorities, Biden’s reluctance to talk about foreign wars is understandable. Yet if his administration reverts to the militarized definition of American global leadership that for decades has been the establishment’s default position, he will find the subject difficult to avoid. That path will lead to more war, inevitably clouding Biden’s rhetorical vision of light overcoming darkness.
If Biden is serious about transforming U.S. foreign policy, he will prioritize matters that pose an immediate threat to the safety and well-being of the American people. Terrorism still poses a nagging problem and always will. Aggressive actions by adversaries such as China, Russia, and Iran serve to remind Americans of the permanence of geopolitics. But in terms of proximate danger, all of these supposed threats pale in comparison with the death toll caused by the coronavirus pandemic or the havoc caused annually by climate-enhanced storms and wildfires. None of these actual threats will yield to a military solution.
War is the nemesis that will prevent Biden from achieving what he promises to do. A first step toward building the virtuous United States he desires is to avoid needless and futile armed conflicts. That will require a radical reorienting of U.S. national security policies to prioritize the safety and well-being of the American people at home, not the pursuit of phantasmagoric foes abroad. (With thanks from Foreign Affairs)
( ANDREW BACEVICH is President of the Quincy Institute for Responsible Statecraft and the author of After the Apocalypse: America’s Role in a World Transformed (forthcoming).)