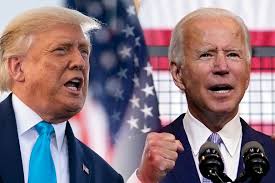 Washington: US President Donald Trump on Friday alleged that the Democrats sabotaged the election process and blamed ‘Big Media, Big Money and Big Tech’ for coming to their aid.

He attacked the electoral process claiming that the ballot counting process was aimed at decreasing his lead in battleground states. He also blamed election workers without evidence and said that they were secretly supporting the Democrat presidential nominee Joe Biden.
“Suppression. There are few states yet to be decided in the presidential race. The voting apparatus is run by Democrats in these states. We were winning at those key locations by a lot actually and then our numbers getting wheedled away miraculously in secret,” he said accusing Democrats of indulging in voter suppression.

Here are the top updates for the US Presidential Election 2020:

• Several news networks like the ABC, CBS and NBC cut away from the US President’s Thursday evening address and only Fox News and CNN telecasted the entire speech. NBC’s Lester Holt interrupted the feed from the White House and said, ““We have to interrupt here, because the president has made a number of false statements, including the notion that there has been fraudulent voting. There has been no evidence of that.”

• Pennsylvania Secretary of the Commonwealth Kathy Boockvar said, “The closer the race is, the longer it takes,” backing off on her previous statement that Pennsylvania could declare the winner in the presidential race by Thursday night, according to Bloomberg.

• Nevada is yet to count 190,150 ballots and 90% of these ballots are in Clark County, Las Vegas, according to Bloomberg. Nevada has become an important battleground state these elections where Biden is leading Trump by more than 10,000 votes according to the New York Times.