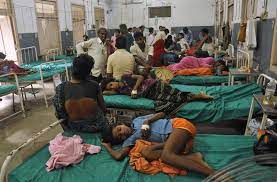 The recent surge has started consuming the lives of people in villages. According to information in the absence of tracing and testing majority of deaths are being attributed to “fever and cold” with local untrained doctors handling the cases.

Lucknow: There are alarming reports of surge in Covid-19 cases in rural areas. People with Covid-19 symptoms are rushing to doctors at PHCs and CHCs which are virtually ill-equipped to tackle the situation. In view of the emerging crisis the Chief Minister Yogi Adityanath has ordered for testing and tracing of virus hit people in villages from May 4, which in view of poor medical infrastructure in villages is going to be gigantic task.
In this connection the chief minister has asked to constitute monitoring teams at the district level. During the last one year the villagers, not taking the pandemic seriously considered the virus as urban phenomenon and did not bother to take protective measures. No doubt despite arrival of around 25 lakh migrants to rural areas, the villages were unexpectedly safe from the pandemic. But the recent surge has started consuming the lives of people in villages. According to information in the absence of tracing and testing majority of deaths are being attributed to “fever and cold” with local untrained doctors handling the cases. From rural areas of Saharanpur in west to far off villages in Purvanchal, cases are surfacing fast which has also led to rush to district hospitals and private nursing homes.
Commenting of the situation Dr Kausar Usmani of KGMU said “during the first wave we could quickly identify any new case and isolate them as there was lockdown and the movement was restricted. At present multiplication is faster and it is no easy and isolate as people frequently travel from villages to city and go back”. He said panchayat election have also made people to travel from far off areas to their villages and as the virus was this time more virulent the spread too was faster in rural areas.
No doubt the state election commission on the instruction of the supreme court had issued strict guidelines to follow covid protocol during polling and counting but the images emerging from the rural areas presented altogether different picture with the local police being a mute spectator. The threat of further surge continues to persist as harvesting season is on and thereafter marriage season which started from April 22 would continue till July.
The additional chief secretary health and family welfare Amit Mohan Prasad said that migrant workers returning to UP would have to remain in quarantine facilities in various districts. He said asymptomatic migrants would have to stay in home quarantine for 14 days. He said village surveillance committees have been activated to monitor health of migrants in villages. According to information there are spurt in cases in Goraphpur, Deoria, Azamgarh, Maharajganj, Kushinagar, Sidhdharth Nagar, Basti, Sant Kabir Nagar and Ghazipur in Purvanchal and several western UP districts. The situation is reportedly no different in Bundelkhand from where increase in cases are coming up from Jhansi, Hamirpur, Banda and Jalaun. These districts were earmarked as controlled areas during 2020 outbreak. During last year pandemic less number of positive cases were reported from villages. However now the situation has reportedly changed because of infected migrant people. According to reports from various districts the village committees have been asked to alert the health and the district administration if any migrant had covid symptom