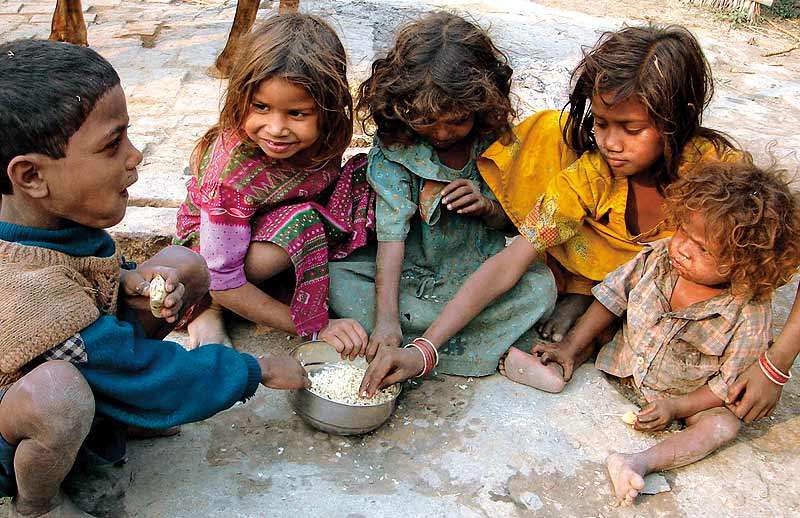 The unholy nexus and its octopus like grip over the nutrition supply system under ICDS is so formidable that several efforts by activists to elicit information regarding the contract conditions and details about suppliers through the provisions of the Right to Information Act have failed abysmally in Uttar Pradesh, writes former IAS officer V S Pandey

The recently published World Hunger Report and the Human Development Report paint a dismal picture of our nation. As per the Human Development Report 2021-22, India’s rank on the Human Development Index (HDI) has slipped from 130 in 2020 to 132 in 2022. The rank indicates the state of a nation’s health, education and average income. It is measured on four parameters — life expectancy at birth, mean years of schooling, expected years of schooling and the Gross National Income (GNI) per capita. This report has been published since 1990 by UNDP and reflects the level of overall development .
For decades, India has been ranked below many countries which are not as well endowed with natural resources as we are. Successive governments have kept on ignoring the poor performance on these critical parameters and did not do anything substantive to remedy the situation. All Governments, past and present, need to answer why our nation is ranked so poorly in World Hunger report rankings- despite thousands of crores of rupees having been spent for decades under Integrated Child Development Scheme to remove malnutrition in children below the age of six. It is common knowledge that in many states, well entrenched mafias are at work in the business of distribution of the nutritious ahaar to children and it is almost impossible to dislodge them from this lucrative business. Various audit and committee reports had pointed out the all pervasive corruption in distribution of nutrition supplies but to no avail. A report by the Supreme Court Commissioner in November 2012 clearly stated that “the contractor-corporate lobby has a firm grip over the ICDS ration supply business, worth Rs 8,000 crore”, with specific reference to Karnataka, Uttar Pradesh, Meghalaya and Maharashtra. The commissioners recommended an independent investigation, under the apex court’s supervision, to investigate the “possible nexus between politicians, bureaucrats and private contractors in the provisioning of rations to ICDS, leading to large-scale corruption and leakages”. This unholy nexus and its octopus like grip over the nutrition supply system under ICDS is so formidable that several efforts by activists to elicit information regarding the contract conditions and details about suppliers through the provisions of the Right to Information Act have failed abysmally in the State of Uttar Pradesh . Clearly, until this nefarious collusion of politicians, bureaucrats and supply mafias class is broken , any effort to ensure the healthiness of children, especially of poor and marginalised communities, against this corporate-driven agenda of making a business out of nutrition shall remain unsuccessful.

A few months ago, the Government of India revised and relaunched Saksham Anganwadi and Poshan scheme as an Integrated Nutrition Support Programme which seeks to address the challenges of malnutrition in children, adolescent girls, pregnant women and lactating mothers through a strategic shift in nutrition content and delivery and by creation of a convergent ecosystem to develop and promote practices that nurture health, wellness and immunity. In the absence of a strong political will to root out widespread corruption in the so called “Poshan” distribution to children under the Poshan scheme ,it is doubtful whether this effort will improve the situation in coming years by addressing the issue of malnutrition adequately.
To improve the nation’s standing in the Human Development and Hunger Index ,the government urgently needs to take concrete steps to improve the school education and health delivery system first. These are in bad shape. It has to implement targeted programmes honestly . What needs to be done is known to every government. It is not rocket science. However, a lack of vision and commitment on the part of the political and administrative system, has failed to improve the situation. There is no urgency still- no blue print has been prepared to remedy the situation in a time bound manner. India does not lack resources to remedy the evil neither it lacks the skill or knowledge to complete the task. We should have created the requisite education and health infrastructure to cater to our needs. We urgently need a time bound road map, adequately supported with requisite funds to provide necessary basics to the masses for a decent living- like proper housing equipped with electricity and water supply, sanitation, toilets etc. With education, health and housing issues attended to in a time bound manner, governments have to then intensely focus on eradication of poverty by ensuring decent employment opportunities for all. All these goals are attainable in a short span of time provided there is a strong political will and courage to realise these basic goals.
Many much less endowed countries on this planet could successfully achieve these milestones long ago and many more are on the verge of attaining them. India had a long age of prosperity . The time has come to revive the glories that we once had enjoyed as a global power. Our people deserve to enjoy a life devoid of poverty, inequality , discrimination, injustices and bias. It is time for them to be azaad from the shackles of illiteracy and malnutrition.