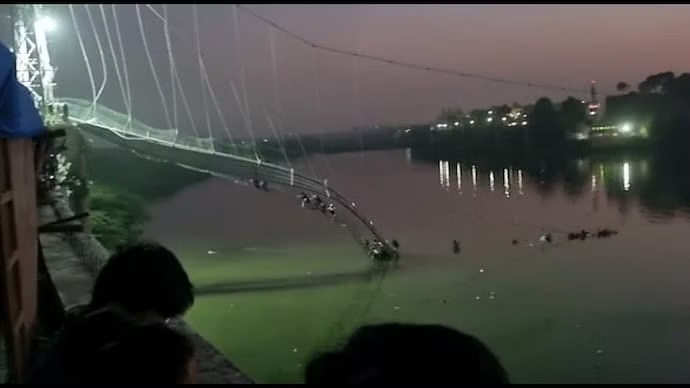 The country has failed to recognize that the all-pervading corruption in all kinds of construction activities is at the root of these problems. Bridges do not fall on their own. They are made to collapse by malfeasance, leading to neglect of standard operating procedures and use of poor quality material and callous workmanship, writes former IAS officer V S Pandey

The horrific bridge collapse in Morbi, Gujarat, causing massive loss of lives has shocked the nation. This incident is very worrisome as the collapsed bridge had been renovated recently and opened to the public only a few days ago. It exemplifies the totally callous and negligent attitude of the agency and officials responsible for the renovation work. This is not the first time that a bridge has collapsed- causing loss of precious lives on a huge scale. A few years ago, several lives were lost due to a bridge collapse in West Bengal. Similarly an under construction over bridge in Varanasi, the constituency of the Prime Minister, also had collapsed killing people. The moot question is how such incidents keep recurring regularly. After the initial hue and cry we nonchalantly return to business as usual- till the next collapse.

The people have learned to coexist and suffer travel with roads full of potholes, bumps, or even non-existent roads or collapsing bridges as if these things are inevitable and acts of God. Our governments have failed to act promptly and convey this blunt message to those culpable that in our nation we have an elaborate system of accountability in existence, since independence, and whenever anything goes wrong then whosoever is accountable for the catastrophe should be made to pay stringently for failing to do his duty honestly and diligently.
In this incident, an enquiry has already been set up to bring out the accurate facts before the public. It is hoped that whosoever is found wanting will be taken to task as per the law of the land. But the sad part is that after every such mishap resulting in the tragic loss of so many innocent lives, enquiry committees are duly appointed and a series of recommendations made to stop recurrence of such incidents .But to no avail. We, as a nation, have failed to recognize that the all pervading corruption in all kinds of construction activities is at the root of these problems. Bridges do not fall on their own. They are made to collapse by malfeasance, leading to neglect of standard operating procedures and usage of poor quality material and callous workmanship.
I vividly remember an episode in my tenure as District Magistrate, Sitapur District , Uttar Pradesh way back in 1988 when the new Chief Minister, Shri Narayan Dutt Tiwari after assuming charge , convened a meeting of district officials in Lucknow . He expressed grave concern in the meeting over the poor quality of road construction in the State. During the meeting, he repeatedly asked the question as to why the quality of road construction works was so poor and why roads disappeared shortly after construction. This point was discussed at length, and senior officers gave several rhetorical reasons and made a variety of excuses. I then got up and bluntly said that the department concerned involved in the road construction work across the state is to blame as it will only deliver poor quality roads . Visibly shocked , the Chief Minister asked,’’ why?’’ I promptly replied, “ the present Chief Engineer of the Engineering Services Department is thoroughly corrupt. All the officers sitting here know that without commission nothing gets done there. The concerned Officers also know that he is being protected by higher ups and Ministers. When you appoint an honest person as the Head, then only will the quality of roads improve.’’ Hearing this, there was a stunned horrified silence. The meeting was ended immediately.
The situation has not only not improved since then but has degenerated even more over the years. Corruption has eaten into the vitals of our body politic. It is difficult to serve in the system with integrity. The situation has worsened so much that, barring a few exceptions , nobody is allowed to even bid for award of contracts unless he pays a hefty commission to those at the apex. When the higher ups directly are embroiled in this enormous cesspool of corruption then who will restrain them?. The results are there for all to see. When people manning the system get involved in this murkiness , it is a free for all. Highly inflated estimates become the norm , followed by the distribution of commission from the top to bottom of the hierarchy. Once everybody is on board , evading responsibility is easy . Its not rocket science. Every commoner understands that the picture being played out is devoid of integrity and truth.
The father of our nation had said” There is higher court than court of justice and that is court of conscience . It supersedes all other courts”. Even though this corrupt coterie are roaming free, they are profoundly guilty in the higher court of conscience. They need to understand this seminal truth and reform themselves before it is too late.
The rot that has set in the political and bureaucratic setup has brought immeasurable misery to the hapless people our country. Earnest efforts to remedy the situation are required to be undertaken by all. We cannot keep vacillating timidly-to our own peril. Henry David Thoreau wrote in his famous essay “civil disobedience”- “They hesitate, and they regret, and sometimes they petition; but they do nothing in earnest and with effect. They will wait, well disposed, for others to remedy the evil.” Let us heed Thoreau , act fearlessly and stop succumbing to the wages of cowardice.
(Vijay Shankar Pandey is former Secretary Government of India)