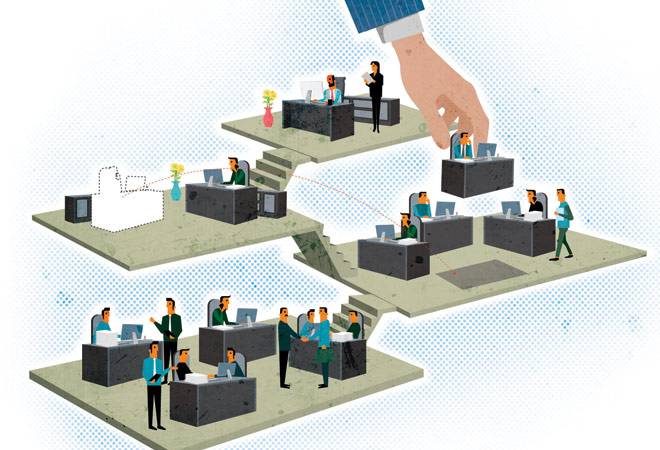 A minuscule of officers dispose off the files in time, and, answer letters in time, however, the majority sits on the files, does not answer or even acknowledge letters at all, writes Prof. H C Pande

In classical physics an inertial system is defined as a frame of reference in which a body remains at rest, or, moves with constant linear velocity, unless acted upon by external forces. Galileo, apparently, had an astonishing foresight, for, he seems to have described, may be, unknowingly, the frame of governance, in India, half a millennia ahead of time. Nothing moves in this country be it the legislature or the executive or the judiciary. All of them love to remain in the state of rest, or, keep moving at a constant leisurely pace, regardless of the urgency of the matter put up to them, UNLESS propelled by powers outside the system. It therefore follows that the code of conduct, and, the rules of executive business, being internal to the system, cannot change the state of the system one iota.
Even if Galileo had not postulated, or, Newton had stated the first law, the villain inertia was ever present in India. In fact, Inertia and India have strong affinity for each other. This is not surprising, as, the spellings of both, start ,as well as, end, with the same letters.
For most of us, mental cogitation has to be avoided at all costs, as if it might strain a brain cell or two. This is true for a large cross-section of our society. A minuscule of officers dispose off the files in time, and, answer letters in time, however, the majority sits on the files, does not answer or even acknowledge letters at all. From the dealing Assistant to the Ministry/Department, Secretary,the standard noting on the files is ‘as proposed’.A true incident of the Raj days was related by a senior bureaucrat.A file was put up to a Secretary,a Britisher,and,he noted on the file ‘I agree with the dealing Assistant’,but the sarcasm was wasted on the subordinates.We seem to have improved the system further,as the dealing Assistant proposes and the Minister disposes,if they feel like it.For this situation,the merit,of the officers of the elite service,is not wanting but it is just indolence at play.
In the academia,teachers come to the classroom,generally late and unprepared.The research guides only tell the students how to ‘cut and paste’ and publish papers without any original work of their own.The students too depend on so-called ‘Key books’ and ‘Guess papers’ to avoid solid work throughout the academic year.The capabilities are not wanting,but,again the devil of inertia is at work.
Physical work is anathema for most people.Here again why take a risk and end up with a pulled muscle.In the Police services,for example,just a handful of Policemen are physically fit for their arduous work,and,all but regular exercise is needed to take care of it.Here too lethargy is the culprit.The British have left and the Maharajas and Nawabs are history but the ‘Koi hai’ syndrome is still around,so why exert yourself.
Entropy is a basic concept in physics of heat,work and energy.Entropy is a measure of a system’s thermal energy per unit temperature that is unavailable for doing useful work.A system may have high energy,but,if the entropy is high,little useful work can be done.To put it another way,low entropy means that the system can perform more useful work.Our system of governance is of high entropy,meaning thereby that energy available for useful work per person is low.
Fundamentally,entropy is the degree of randomness or disorganisation.The entire society,in India,has high entropy,as no one cares two hoots,for statutes,rules,and,regulations in force.Each one is for himself,and, always wants,or,has his way,in every matter.Clearly,in such an environment,the very idea of organisation is meaningless.Yes,there is the Constitution,a whole series of Constitutional authorities,code of conduct,service rules ,and so on and basically a high energy system is in place.But,then the entropy is astoundingly high too.Here,bereft of cosmetics,the term means high indiscipline. From the Hon’ble members not attending the Parliament session after session,and,disturbing the proceedings when in attendance,to the Officers not attending duties in time and not discharging their responsibilities,to illegal strikes by unions and associations,it is an unending list of acts of gross indiscipline by every section of the society.
For India to catch up,and,keep pace with the progressive world,inertia and sloth have to be replaced by activity,and,dynamism.So also,indiscipline and disorder have to be replaced by obedience and harmony.
Any activity within the present frame of reference,is largely generated by external forces.It is unfortunate that,as of now,the forces at work are,in most cases,money,muscle,and,mob.These are the forces of evil causing destruction in the long run.The need of the hour to unite the constructive forces,scattered over the entire nation,which as a unit create a positive force for the required transformation of the present mind-set.There is no other way.