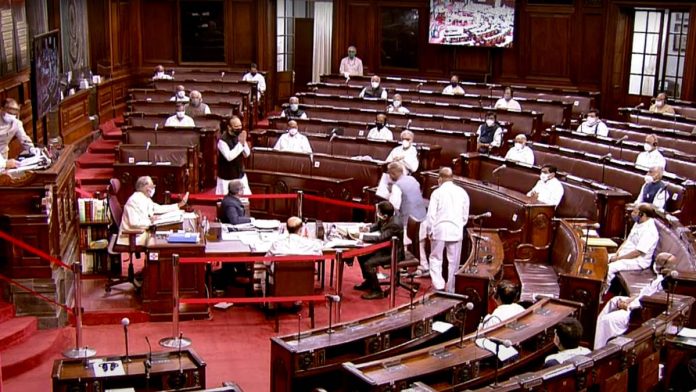 The Upper House of Parliament (Rajya Sabha) on Sunday passed two contentious farm bills amid uproar by Opposition members. The bills have triggered protests by farmers at several places.

The two bills – Farmer’s Produce Trade and Commerce (Promotion and Facilitation) Bill, 2020, and the Farmers (Empowerment and Protection) Agreement of Price Assurance and Farm Services Bill, 2020 – were passed by Lok Sabha on Thursday.

These bills will now be sent to President Ram Nath Kovind for his assent.

The Opposition parties protested against the bill, criticising the manner in which they were passed in Parliament. In fact, the Opposition members who had earlier moved amendments refused to participate in the proceedings when the bill was being put to vote.

Here’s the stand taken by the various Opposition parties:

BJP president J P Nadda hailed Parliament’s nod to two farm sector reform bills on Sunday, saying they will give farmers freedom in selling their produce and rid them of middlemen.

He also hit out at the opposition parties over the ruckus in the Rajya Sabha after the Chair proceeded to take up the bills for passage as he termed the behaviour “highly irresponsible” and an attack on democracy.

The party led by Jagan Mohan Reddy announced its support for the bill. YSRCP MP Vijaysai Reddy slammed the Congress and said that there is no reason for it to oppose agriculture-related bills. “I want to bring the hypocrisy of Congress party. In their manifesto of Lok Sabha elections, they have said the same things which are in the bills and now they are not supporting the bills,” he said.

Ram Chandra Prasad Singh of the JD(U), while supporting the bills, said it is for the first time that a farmers’ policy has come after a long time. He said in 1991 when the country saw liberalisation, it missed bringing agriculture reforms.

He cited the example of Bihar where the Nitish Kumar government has abolished the APMC Act in 2006 and yet farmers are getting good price for their produce through MSP and farmers are producing more.
Congress

The Congress has targeted the government on the issue of Minimum Support Price (MSP), calling the farmer bills introduced by the government as “black laws”. “Why the government is running away from providing legal obligation for MSP. Who will take a guarantee of MSP outside ‘Mandi’,” Congress general secretary Randeep Singh Surjewala said. The Centre has tried to allay the concerns of the farmers that the MSP will remain intact and slammed the Opposition parties for misleading the farmers for their political gain.

Prime Minister Narendra Modi tweeted to say on Sunday afternoon that the MSP will remain intact, and hailed the passage of the bills in Parliament.

SAD, the oldest constituent in the ruling National Democratic Alliance (NDA), said that there can’t be any talks with the Centre unless the agriculture bills are taken back. This stand was announced by SAD chief Sukhbir Singh Badal on Saturday.

Punjab food and civil supplies minister BB Ashu took a dig at SAD for taking a “U-turn” on the issue. He accused Akali Dal of changing their position on the Bills after “realising the seriousness of the matter.”

These parties wanted the bill to be sent to a select committee of Rajya Sabha for greater scrutiny. Deputy Chairman Harivansh put their demands for vote and said the motions have been negated by voice vote. There was then slogan-shouting as the members tried to heckle the presiding officer who was protected by House marshals.

Hitting out at the Modi government over the issue of the farm bills, RJD leader Tejashwi Yadav said on Sunday that his party has always fought for the rights of farmers and will fight “tooth and nail” against this “corporatisation of the agriculture sector”.
Why did a Union cabinet minister resign if the bills were not “anti-farmer”, he said while speaking to news agency PTI. Yadav was referring to SAD leader Harsimrat Kaur Badal quitting the Cabinet last week over the farm bills issue.

The Maharashtra party took a stand against the farm bills with its leader Sanjay Raut demanding a special session to discuss them. Raut also asked the government to guarantee that no farmer will commit suicide after the bills are passed, and that their incomes will increase.

The Tamil Nadu party, part of the BJP-led National Democratic Alliance (NDA), opposed the bills. It claimed the bills will favour the corporate houses.

TRS chef and Telangana chief minister K Chandrasekhar Rao had said he is against the bills, alleging these would cause great injustice to farmers in the country.

Major farmers’ organisations, such as the Bharatiya Kisan Union and the umbrella All-India Kisan Sangharsh Coordination Committee, a front for nearly 200 farmers’ groups, have also opposed the bills.

The AAP has opposed the farm bill. The party’s Rajya Sabha member Sanjay Singh lashed out at the government alleging it wants the corporates to take over the agriculture sector of India