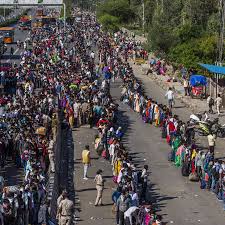 Lucknow, May 21: The Log Party today emphasised the need for the creation of jobs to alleviate the sufferings of the people badly affected by corona virus pandemic. The Log Party said the country was in the middle of massive economic crisis before the pandemic and with two months of lockdown imposed to curb the spread of virus, the slowdown has now turned into recession.

The spokesman thus said that the key component of any relief package has to take into account the rising unemployment. By providing additional Rs 40,000 crore into MGNREG the government is hoping to create an economic buffer for those who have returned home to their villages. But past records show that over the decades this rural-based scheme has turned out to be massive drain on state exchequer because of massive corruption in its implementation. The spokesman said there are several reports indicating how MGNREG money has been pocketed by corrupt official machinery with only a part of it going to targeted beneficiaries. The spokesman said if the central and state governments are really interested in helping the poor labourers it should devise honest and transparent ways to implement it. The spokesman said unemployment caused by pandemic is multifaceted and the government would have to devise an overall strategy encompassing every section.