Analysts suggest Biden administration could end the near-unconditional support that Riyadh has enjoyed over the years.

US President-elect Joe Biden has made his position on Saudi Arabia and its war in Yemen clear.

In the past two years, Biden has said Saudi Arabia’s government has “very little social redeeming value”, that Riyadh had murdered “children … and innocent people” in Yemen, and it was a “pariah” state. “Under a Biden-Harris administration, we will reassess our relationship with the Kingdom [of Saudi Arabia], end US support for Saudi Arabia’s war in Yemen, and make sure America does not check its values at the door to sell arms or buy oil,” Biden said in October.

That forceful language is echoed by the wider Democratic Party. Just in the past week, US Representative Ro Khanna tweeted the Democrats would “stop funding the Saudi war in Yemen”.

The reason for this push to punish Saudi Arabia on the Democratic side is clear – the war in Yemen’s continuing humanitarian cost, the murder of Saudi dissident Jamal Khashoggi in the Saudi consulate in Istanbul in October 2018, and the Trump administration’s overt support for Saudi Arabia throughout these affairs. 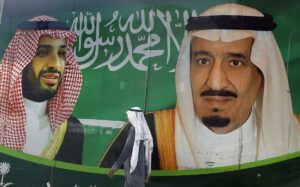 Aside from shared antipathy for Iran, Saudi Arabia was President Donald Trump’s first overseas visit, and the outgoing US leader bragged that he protected Crown Prince Mohammed bin Salman (MBS) after Khashoggi’s killing. Many Democrats, on the other hand, called for MBS to be held accountable.
However, there is often a difference between promises made on the campaign trail and the reality of life as the leader of the most powerful nation on Earth – one that has historically always sought to remain friendly with Saudi Arabia.

Analysts say it is, therefore, more likely Biden will adopt a balanced approach that, while different to Trump’s, is not quite the repudiation of Saudi Arabia that some in the Democrat base might want.

“The Biden administration will end the perception that the Saudi leadership enjoys near-unconditional support in the White House … with a view to reframing it around goals that serve both the US and Saudi interests,” Kristian Ulrichsen, a fellow for the Middle East at Rice University, told Al Jazeera.

“These would include a way of disengaging Saudi Arabia from Yemen.”

Ulrichsen said this new policy towards Saudi Arabia would extend to arms sales, as Washington seeks to attempt to not lose Saudi business while pivoting to arms sales of a different nature.

“Given that advisers around Biden have maintained a commitment to helping defend Saudi Arabia against regional adversaries, I’d imagine there would be more of a focus on ensuring that any weapons sales would be defensive rather than offensive in nature,” Ulrichsen said.

A quarter of US weapons sales in the five years between 2014 and 2019 went to Saudi Arabia, up from 7.4 percent in 2010-2014, according to the Stockholm International Peace Research Institute. Saudi Arabia began its military involvement in the war in Yemen in March 2015.

Ending Yemen’s war
In addition to billions of dollars in arms sales, the US provides logistical and intelligence support to the Saudi war effort in Yemen, and previously refuelled Saudi planes in-flight.

In April 2019, a bipartisan resolution to end American involvement in the war was passed by both houses of Congress, only to be vetoed by Trump. At the time, the president defended his actions by saying peace in Yemen could only come through “a negotiated settlement”. The question now is whether Biden will have more luck in bringing about such a solution.

“I think the Biden administration can have a very positive impact on ending the war in Yemen,” said Gregory Johnsen, a former member of the UN Security Council Panel of Experts on Yemen. “Indeed, the US may be the only country, which – if it so chooses – can put enough diplomatic pressure on Saudi Arabia to end the war in Yemen.”

However, ending Saudi involvement in Yemen does not necessarily mean the wider conflict in the country will be over.

“Ending the Saudi-led war in Yemen is step one, but the next and much more difficult step is ending Yemen’s civil war and putting the country back together again,” Johnsen said.

Aside from Saudi Arabia and the United Arab Emirates, the war in Yemen involves a myriad number of warring parties, including the internationally-recognised government, the Iran-allied Houthi rebels, and the separatist Southern Transitional Council.
Fighting in the country has intensified over the past few months with the Houthis advancing into Marib, the Yemeni government’s power-base in the north of the country, and home to a large population of internally displaced people.

If the Biden administration is successful in a push for peace talks, it may come as the Houthis hold the upper hand on the battlefield. And that does not necessarily mean the outcome of any negotiated agreement will lead to an end to the war on the ground.

“We should not overestimate what the Biden administration can do in relation to Yemen’s war,” Nadwa Dawsari, a non-resident scholar at the Middle East Institute, told Al Jazeera. “A political settlement under the current circumstances would further complicate Yemen’s war and play into the hands of the Houthis and, by default, Iran.”