The United States has ceded control of northeastern Syria to Turkey and Russia, but the operation that ended the life of IS leader Abu Bakr al-Baghdadi put Turkey in a tough position. Baghdadi’s death — particularly the location of the raid — turned the tables in favor of the Kurds, who have long said that Turkey does not effectively fight IS militants in regions under its control.

The compound where the erstwhile caliph died was located in the small northwestern Syrian village of Barisha, only some 5 kilometers (3 miles) from the Turkish border. A day after his death, on Oct. 26, IS spokesman Abu al-Hassan al-Muhajir was killed in the village of Ain al-Baydah near Jarablus, which has been under the control of the Turkish army since Operation Euphrates Shield in 2016. There are also unconfirmed reports that US troops rounded up several jihadis in separate airborne raids conducted in Jarablus. 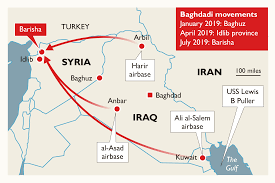 The operations indicate that US forces will continue to pursue jihadi cells with the help of intelligence provided by the Syrian Democratic Forces (SDF). Redur Xelil, a spokesman for the Syrian Kurdish People’s Protection Units (YPG), confirmed that intelligence operations will intensify against IS sleeper cells. The YPG — the backbone of the SDF — is an offshoot of the outlawed Kurdistan Workers Party (PKK), which is considered a terrorist organization by Turkey and many other Western powers, including the United States.
Apparently, Washington has two goals. First, it is scrutinizing the area east of the Euphrates, which is under the de facto control of Russia and Syrian government forces after the Oct. 22 deal reached by Turkey and Russia in Sochi. Second, Washington is shedding light on the problem of IS fugitives west of the Euphrates, an area under the control of the Turkish army and its proxies.

Several factors suggest that pressure on Turkey will grow.

First, the American aircraft that conducted the Baghdadi raid took off from a military base near Erbil in Iraqi Kurdistan instead of Turkey’s Incirlik air base, which is seven times closer to Barisha. The United States informed Turkey of the operation to gain permission to use Turkish airspace, but didn’t specify the details of the operation. Barisha is only a few miles away from the Bab al-Hawa crossing north of Idlib.

Although the Idlib region is generally under the control of Hayat Tahrir al-Sham (HTS), Barisha is the turf of Hurras al-Din, an al-Qaeda affiliate that acts in concert with HTS despite splitting from it in 2018.

Barisha — given the routes and roads leading to it — is overseen by Turkey’s 12 observation posts in Idlib. This leads to the question of whether Turkey knew of Baghdadi’s presence in the area, or whether Turkey did know and ignored it. 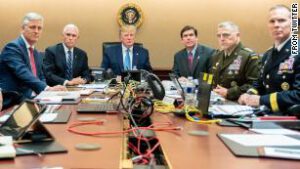 Turkey’s integrity in the war on IS once again comes under suspicion. Most importantly, the Donald Trump administration’s decision to not use the Incirlik base and to not share operational details demonstrates that Washington does not trust its NATO ally. This alone is a great source of stress for Ankara. The next question Ankara will likely face is, who are the Turkey-backed forces in Syria?

Furthermore, the SDF’s contribution in the raids undermines the legitimacy of Turkey’s claim that the Syrian Kurdish groups are terrorists.

Meanwhile, the ongoing intelligence cooperation between the Kurds and Washington, and the Trump administration’s plans to maintain an American grip over oil fields in Deir ez-Zor, complicate Russia’s reconciliation efforts between the Syrian government and the Kurds.

Turkish authorities are trying to portray the operations as coordinated efforts. In an attempt to emphasize Turkey’s cooperation in the fight against IS, the Turkish authorities rounded up several IS suspects in major Turkish provinces, including in Istanbul and Ankara.

Pro-government media reports reiterated that IS killed 315 people in Turkey in 21 separate attacks and that the Turkish authorities have killed 3,500 IS members and arrested 5,500 suspects.

Yet these attempts fail to diffuse the aforementioned questions.

Another question prompted by the recent operations is whether Idlib — the Syrian rebels’ last stronghold — has turned into a safe haven for IS members. The factions controlling Idlib have, in the past, been enemies of IS. Hence the surprise when it turned out that Baghdadi and his men were hiding in the province.

However, Jarablus and al-Rai were under IS control from 2014 to 2016. The jihadi group is familiar with the towns and their hiding opportunities. The region is also an ideal spot for IS members who are trying to flee to Turkey.

Despite the hostilities between IS and many factions of the Turkey-backed Syrian National Army, IS can still shake hands with certain factions. Indeed, the compound where Baghdadi hid was owned by Abu Mohammed al-Halabi, a leader of Hurras al-Din. Hurras al-Din was created by al-Qaeda loyalists who rejected HTS’ decision to cut ties with al-Qaeda. Since then, Hurras al-Din has grown stronger, encompassing other al-Qaeda loyalists.

HTS cannot completely close its doors to its former fellows, despite its past attempts to kill Baghdadi. In the end, the Salafi jihadis all share the same motto: “The door of repentance is always open to believers”

Also, claims that IS was gaining ground in Idlib are not new. For example, when besieged in their last holdout in Baghouz in February 2019, IS members had asked for safe passage to Idlib during cease-fire negotiations.

Some members were said to have fled to Idlib with the help of smugglers. In March, Mustafa Bali, an SDF spokesman, said Baghdadi had also fled to Idlib.

Other factors indicate that IS had its eye on Idlib as it lost ground in Raqqa and Deir ez-Zor. In May 2018, HTS raided IS cells located in Idlib’s eastern and western countryside. In retaliation, IS executed several HTS members in June 2018.

In October 2018, IS killed 15 HTS militants in a bomb attack at al-Mutlaq checkpoint, prompting its rival to shoot 12 IS members it had arrested.

HTS also conducted its own search for Baghdadi after receiving information that he was in the area, Reuters reported. According to the report, the jihadi groups shared this information with “some intelligence agencies.” Did this include Turkish intelligence which is said to be in contact with the HTS? If so, did Turkey do anything about it? These questions remain unanswered.

The Baghdadi raid comes as Bashar al-Assad’s forces tighten their blockade on Idlib. The Syrian army sped up operations in Idlib after Turkey and Russia reached an agreement regarding northeast Syria on Oct. 22. Syrian troops entered Tell Huwash, Qalaat al-Madiq and Breidij north of Hama, and Hayalin, east of Idlib. Russian forces stepped up their bombardment of HTS positions around Taftanaz, Hass, Kafr Nabl and Sarmin.

Although Turkey doesn’t want to disturb the status quo in Idlib until the constitutional committee concludes its work in Geneva, the possibility of IS militants regrouping in Idlib will complicate Turkey’s efforts.

Besides, HTS and its allies are considered terrorist organizations and are not part of the political process. HTS also rejects belonging to any political solution in Syria despite efforts to provide a more moderate outlook to the jihadi group.

“Idlib is outside of all international and regional deals that can hurt the revolution. HTS will never compromise its principles,” HTS spokesman Abu Haled al-Shami said Oct. 25.

These developments suggest that Turkey’s job in Idlib is getting harder. Although the Turkish government praised the killing of Baghdadi as “an important contribution” to the war on terror, the new situation has brought up some important facts that Turkey isn’t willing to face.

Fehim Tastekin is a Turkish journalist and a columnist for Turkey Pulse who previously wrote for Radikal and Hurriyet. He has also been the host of the weekly program “SINIRSIZ,” on IMC TV. As an analyst, Tastekin specializes in Turkish foreign policy and Caucasus, Middle East and EU affairs. He is the author of “Suriye: Yikil Git, Diren Kal,” “Rojava: Kurtlerin Zamani” and “Karanlık Coktugunde – ISID.” Tastekin is founding editor of the Agency Caucasus. On Twitter: @fehimtastekin