COVID-19 Could Bring Down the Trading System

For three years, the administration of U.S. President Donald Trump has attacked the global trading system. Now other forces are battering international trade. The pandemic spread of COVID-19, the disease caused by the novel coronavirus, is stoking new pressure for protectionism, and the World Trade Organization (WTO) needs to prepare for more countries to capitulate under the strain.

If the trend is left unchecked, the world may repeat the experience of the 1930s, when industrial production fell by nearly 40 percent, unemployment soared, and economic activity remained anemic for the better part of a decade. Then as now, trade barriers did not cause the problems. America’s Smoot-Hawley Tariff Act did not trigger the Great Depression, and tariffs today will not have caused the COVID-19 depression. But such barriers could affect the recovery, especially given the modern importance of cross-border supply chains. What happens now will influence the shape the trading system will take for decades to come.

THE TARIFFS ARE COMING
No one should be surprised if the Trump administration uses the current situation as a pretext for imposing new trade barriers. Trump has shown that he is happy to apply vast trade restrictions in good economic times, even over the objections of American business. Tariffs on tens of billions of dollars of steel and aluminum are still in place. The administration reached a temporary truce with China in February, but most of the trade war tariffs remain, still affecting more than half of two-way trade. Now come the bad economic times—and a presidential election. Trump will need someone to blame for the mass unemployment and bankruptcies that COVID-19 is leaving in its wake. If and when he picks foreigners as that scapegoat, his natural next step will be further protectionism.

Other countries have shown remarkable restraint during Trump’s first three years in office, in that they have not escalated matters with disproportionate protectionism of their own. Perhaps their leaders were waiting for Trump’s tenure to end, hoping to keep the rules-based trading system going as long as necessary for the United States—the system’s architect and leading member—to return to its historical role. With the exception of China, countries largely kept their responses to Trump’s aggression in line with the WTO’s fraying rulebook. They also mostly acted in solidarity and refrained from lashing out at one another. The European Union even took the opportunity to pen new trade deals with Canada, Japan, Brazil, and Argentina, portraying itself as a champion of multilateralism and international cooperation.

The pandemic, however, has strained that solidarity. Trade barriers within Europe have sprung up remarkably quickly. In March, France and Germany banned sales of vital hospital equipment outside of national borders, including to virus-ravaged Italy. The European Commission had to step in with a compromise: member states could limit exports of medical supplies to everyone else, so long as they played nice with one another. With that arrangement, Brussels salvaged internal harmony—at the cost of the moral authority on multilateralism that Europe had worked so hard to maintain during the age of Trump.

Export protectionism is contagious: the United Kingdom, South Korea, Brazil, India, Turkey, Russia, and dozens of other countries have restricted foreign sales of medical supplies, pharmaceuticals, and even food. But nativist economic practices carry risks, the most serious of which may play out not during the pandemic but after it, when industrial production restarts. 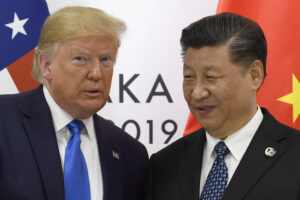 Much of Europe’s manufacturing sector rightly shut down to help limit the public health effects from the coronavirus. But the asynchronous timing of the global pandemic may mean that countries outside of Europe reopen their economies earlier than Europe does. When hundreds of billions of euros in shoes, electronics, chemicals, and other low-priced goods suddenly show up at ports in Rotterdam and Hamburg, European industry will surely kick up a fuss, demanding tariff protection from the onslaught of unfair trade. Moreover, China might try to get its depressed economy going again by subsidizing manufacturing in the manner that led Europe, the United States, and others to complain of unfair trading practices in the first place. Since Chinese products will remain mostly walled off from the United States owing to the trade war, Brussels will be an important bellwether.

But governments outside of Europe will also come under pressure to protect domestic industries, and European exporters will face the brunt of such measures in foreign markets. Companies everywhere can and will seek relief from imports by asking their governments to hit foreign competitors with many forms of tariffs. The WTO’s conditions for levying tariffs are pretty accommodating. An industry needs to show that it has been injured—not a difficult bar to clear given current economic hardships. After that, a common argument industries will make is that foreigners should be punished for doing something unfair.

One tariff catch phrase that will soon creep into public discourse is “countervailing duty.” The term describes an anti-subsidy tariff that is used to discourage unfair competition arising from state intervention in markets. Governments are currently allocating trillions of dollars to keep companies afloat. In the aftermath of COVID-19, lots of imports will arrive on foreign shores from companies that got bailouts. Under WTO rules, it matters little if the domestic industry got a handout, too, or if the foreign subsidy was sensible economic policy at the time. The rules allow for both sides to subsidize and both sides to reciprocate with anti-subsidy tariffs, as inefficient an outcome as that may seem.

In fact, while problematic, that scenario would be far from the worst case. Some governments may ignore WTO rules altogether, mimic Trump’s actions on steel and aluminum, and claim that imports need to be stopped because the trade poses a threat to their national security. Or they may justify tariffs as a necessary response to the public health emergency, as Brussels effectively did with its export controls on medical supplies.

THIS TIME IS DIFFERENT
Only a coordinated political commitment among global leaders will prevent an onslaught of protectionism in these extraordinary times. The WTO rules actually make such protectionism likely in the absence of an upfront plan to stop it. But no such global policy commitment has materialized. We know this, because we know what action against tariffs during a global economic crisis looks like.

The financial crisis of 2008 also produced an economic collapse sharp and deep enough to threaten the modern trading system. Ever since the devastation of the 1930s, the fear has been that economic hardship would cause trade barriers to rocket out of control. Yet the last global recession turned out to produce a shockingly low level of protection. Trade barriers did not shoot up, in part because of the domestic policy response of the U.S. and other governments: large government spending programs, central bank interventions, and flexible exchange rates that ensured that the dollar and euro especially did not remain excessively strong. These policies were significantly different from those that greeted the Great Depression.
Protectionism was also limited because leaders of the major economies got out ahead of the problem. In November 2008, despite not yet knowing the full severity of the economic crisis, the George W. Bush administration brought together leaders of 20 industrialized and major emerging economies in a new G-20, where the attendees made an important pledge: “We underscore the critical importance of rejecting protectionism and not turning inward in times of financial uncertainty. In this regard, within the next 12 months, we will refrain from raising new barriers to investment or to trade in goods and services, imposing new export restrictions, or implementing World Trade Organization (WTO) inconsistent measures to stimulate exports.”

The timing of the 2008 crisis was hardly ideal. Lehman Brothers collapsed, the U.S. financial and automobile sectors needed bailouts, and millions of Americans suddenly found themselves out of work. To make matters worse, the U.S. government was in the midst of a transition: the Bush administration was about to turn out the lights after eight years in office, and Barack Obama would not begin until January 20, 2009.

The Bush administration was both a lame duck and deeply unpopular abroad. The international reputation of the United States was still reeling from the Iraq war. Tensions had escalated with China due to its undervalued exchange rate. Even trade was not going well, as the Doha Round of WTO negotiations had collapsed into acrimony in July. To its credit, the U.S. administration overcame all those obstacles to put together a Washington summit that ultimately helped the trading system survive.

Admittedly, the global disharmony that the Bush administration overcame in 2008 pales in comparison with the bitterness and distrust today.

On March 30, the G-20 trade ministers had a virtual meeting. They made little mention of the coming protectionist pressure or what to do about it. To the contrary, U.S. Trade Representative Robert Lighthizer, a trade skeptic, took the opportunity to blame the COVID-19 crisis on trade itself: “Unfortunately, like others, we are learning in this crisis that over-dependence on other countries as a source of cheap medical products and supplies has created a strategic vulnerability to our economy.”

The joint statement coming out of the G-20 meeting was “not as ambitious” as he had wanted, EU Trade Commissioner Phil Hogan confessed. But France and Germany were partly to blame for having left a mess for Brussels to clean up. Instead of countering the calls for protection, Hogan had to explain why the EU’s own protectionist export controls on medical supplies weren’t as bad as they looked.

WHO WILL STEP UP?
Even if Trump had never come along, COVID-19 would have put the trading system to a stiff test. But Trump has left the WTO less prepared than it might have been. Unlike in 2008, this time there is little hope that immediate leadership will come out of Washington.

Saving the rules-based trading system from a crisis of widespread protectionism will require creativity and foresight from somewhere else. Squint hard enough and some hopeful signs are visible. Trump torpedoed the WTO’s system of resolving trade disputes in late 2019—in response, the European Union organized a workaround, signing up a number of major economies outside of the United States to a framework to resolve their differences harmoniously. And a group of smaller economies—led by Canada and Australia—has put forward an antiprotectionist trade statement on COVID-19 that is more aggressive than any the G-20 could agree on.

Governments of the major economies must do more, and quickly. They should not let Washington’s current dysfunction hold them back. At a minimum, countries will need to channel potentially unstoppable demands for protection into the WTO system’s most transparent, time-limited, and least distorting instruments. A special tariff called a “safeguard” satisfies those criteria and may be the best option. Safeguards are for emergencies, when imports surge and threaten to further damage industry, and they do not require assigning blame to foreigners. Applying one will not tangle policymakers in esoteric arguments over which subsidies granted in response to COVID-19 are “unfair”—a topic unworthy of litigation during a pandemic in which nearly everyone is treating state aid like Monopoly money.

The failure to anticipate and prepare for the coming demand for trade protection could be catastrophic. Starting the trading system over from scratch would be not only extremely difficult but incredibly costly, as there would surely be an interim in which no system functioned at all. But as with containing the pandemic, shoring up trade cannot be any one nation’s sole endeavor. Until the pandemic is contained everywhere, it is a worry anywhere. The same is true for protectionism. (Courtesy: Foreign Affairs)

(CHAD P. BOWN is Reginald Jones Senior Fellow at the Peterson Institute for International Economics and a cohost of the Trade Talks podcast.)