BY ADAM TAYLOR (The Washington Post)
New York : It’s hardly a secret that the Trump administration embraces religion. The president has spoken of his defense of “Judeo-Christian values,” while evangelical Christians like Secretary of State Mike Pompeo and Vice President Pence have emerged as some of the most powerful and long-serving officials in the administration. But what can be harder to spot is when religion stops being symbolic and actually influences real U.S. policy.

A new investigation from ProPublica takes a hard look at exactly that. And, like the Ukraine scandal that prompted impeachment proceedings against President Trump, what ProPublica uncovered involves the alleged misuse of U.S. foreign aid. Although in this instance the motive for a White House intervention appears religious rather than political in nature, the two cases are more similar than they first appear.

In her investigation, ProPublica’s Yeganeh Torbati found that the vice president’s office and others had pushed the U.S. Agency for International Development to reroute aid destined for the Middle East to religious minorities. Iraqi Christian groups in particular were specified to have received U.S. money, Torbati reported, citing internal emails and interviews with current and former officials.

A spokeswoman from USAID defended the funding as appropriate, while Pence’s office has not commented on the reporting. 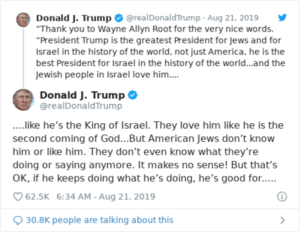 Not everyone was shocked by the report. USAID has been accused of giving out its aid on political conditions for decades, and the Trump administration has made a point of rethinking U.S. financial assistance. “Oh the horror,” Fox News analyst Brit Hume tweeted sarcastically on Wednesday, adding that the story showed an elected official “meddling” in the decisions of “unelected bureaucrats.”

But as Torbati showed, the list of potential problems with the moves were lengthy. Iraqi Christians are persecuted, but they make up roughly 3 percent of the total population; singling them out could inflame religious tensions rather than protect them. It would also ignore the problems the Sunni Muslim majority faced in Iraq, possibly helping the recruitment of extremist groups like the Islamic State.

Some of the groups specified for USAID grants under the alleged influence of Pence’s office and political appointees had been rejected in previous years: One group had no full-time paid staff and had previously taken money from the Clarion Project, a D.C.-based organization that has been criticized as anti-Muslim. The intervention also raised broader questions about propriety. USAID rules specifically forbid political interference and making decisions based on “the religious affiliation of a recipient organization, or lack thereof.”

Career officials worried that an alleged intervention on religious grounds could be outright unconstitutional. But in the Trump era, the separation of church and state often seems like something from a bygone era. Under Pompeo, the State Department launched a Commission on Unalienable Rights backed by religious conservatives and its first-ever faith-based affinity group, which has hosted events with evangelical speakers. The U.S. diplomat gave a private speech titled “Being a Christian Leader,” which was displayed prominently on the State Department website.

U.S. Ambassador to Israel David Friedman, an Orthodox Jew, has added a religious spin to the American role in the Israeli-Palestinian crisis. “Israel is on the side of God, and we don’t underestimate that,” he said at an event sponsored by an American evangelical group in Jerusalem this May. Many argue that such comments are inappropriate for a diplomat, though Friedman is largely following Trump’s lead.
Given his personal life, it’d be tough to mistake the president for an Orthodox Jew or an evangelical Christian. But Trump has undertaken measures that those groups tend to support, like moving the U.S. Embassy in Israel to Jerusalem or appointing a Florida televangelist to the White House. He embraces both groups: This summer he shared a statement from an evangelical who said Jewish people loved Trump like he was “the Second coming of God.”

The president’s newfound embrace of religion stands in contrast to Pence. The vice president has a long relationship with religion that far predates his time in office: As a student at Hanover College, he served as a religious mentor to a young Woody Harrelson. The actor recently described him as “very religious. Very committed.”

It is unclear whether Pence’s religious beliefs ever cause him to be troubled by Trump, especially given the positions the president sometimes puts him in, but he may have reason to be. Allies of the vice president had initially sought to distance him from the Ukraine scandal, prompting some to wonder about a potential rift with the president, but Pence has since been tied to the allegations of a “quid pro quo” by U.S. Ambassador to the European Union Gordon Sondland.

But those who have followed Pence closely say that his most consistent political motive isn’t religion, but winning. And by any measure, the continued support of evangelical Christians will be vital for Trump and Pence’s reelection, as well as Pompeo’s future political aspirations. Consider this and the alleged intervention in USAID programs in Iraq looks similar to moves to block military aid to Ukraine: Both appear to involve intervention based not on U.S. foreign policy aims, or even perhaps the greater good, but something far narrower in scope. (Courtesy: The Washington Post)